Overview
Feed the Cat? is a mobile app concept helping household members to follow up on tasks around the house by notifying each other quickly and easily.
The project timeline was one week for the paper prototype and one week for the hi-fi prototype making it a two-week project in total.
As my first project at General Assembly, this project allowed me to explore many UX techniques in a short time. I conducted user interviews, created concept maps, user flows, wire flows, wireframes, a paper prototype, a clickable high fidelity prototype, and a project presentation.
Context and Challenge
For this project, I worked with my classmate Jared who was my core user. The project kicked off with a user interview where I asked Jared questions about his interest, likes, dislikes, and frustrations, to identify a problem that I could solve with a simple mobile app.

During the interview, I learnt that Jared was sharing a house with his five mates and a cute, plump cat. Jared and his friends were all responsible for feeding the cat. Jared said it was one of his housemates who was more involved with this chore but miscommunications would just happen. Most of the time not exactly sure whether the cat has already been fed, Jared and others would fill up the food bowl upon his Majesty’s wish, possibly letting him get away with more than he needs. Considering there’s been an evident growth in the cat’s belly, Jared was concerned about the health issues this might create.
Feeding the cat was one of the many chores around the house. This miscommunication was also the case for those other tasks.
Process
Defining the problem
To have a better understanding of where the main issues lie, I created a concept map allowing me to visualise Jared’s problem and see different links.

As mentioned before, Jared lived in a house that’s shared by six people and quite understandably they all had their own daily routines. They would wake up, leave for work, come home, go to sleep at different times; and that made their catch up on certain things quite challenging. Even though they were using Facebook and WhatsApp groups for their daily communication, these channels were ineffective when it came to following up on the tasks based on these reasons:
1. When a housemate completes a task, he doesn’t notify others.
2. When a housemate asks if others have completed a task, he doesn’t receive a prompt answer — so he cannot be sure whether to act on it or not.
3. Even if a housemate sends an update message, it gets lost in the flow of the daily chat.
All these made it frustrating for Jared to follow up on chores that could be anything from the house cat’s feed to the pick-up of a parcel. Consequently, this lack of communication led to confusion among the house members.
It was hard for Jared to follow up on tasks around the house.
Thinking towards a solution
So what if Jared and his housemates used a mobile app to follow up on these tasks and be able to notify each other about their status easily and instantly?

Storyboard (Initially, I called this app with the most boring name in the world: Housync.)

To explore how notifications could work, I sketched a couple of ideas. One of the initial features I had in mind was to assign a task to another housemate(s) if one couldn’t do it. Upon sharing these sketches with Jared and getting some feedback, I understood that this feature could only create friction. One of the things Jared mentioned in the interview was that he and his housemates were lazy to check and reply messages. They needed something quick and easy. Whereas this feature of assigning a task through selecting multiple names just increased the steps for notifying others. 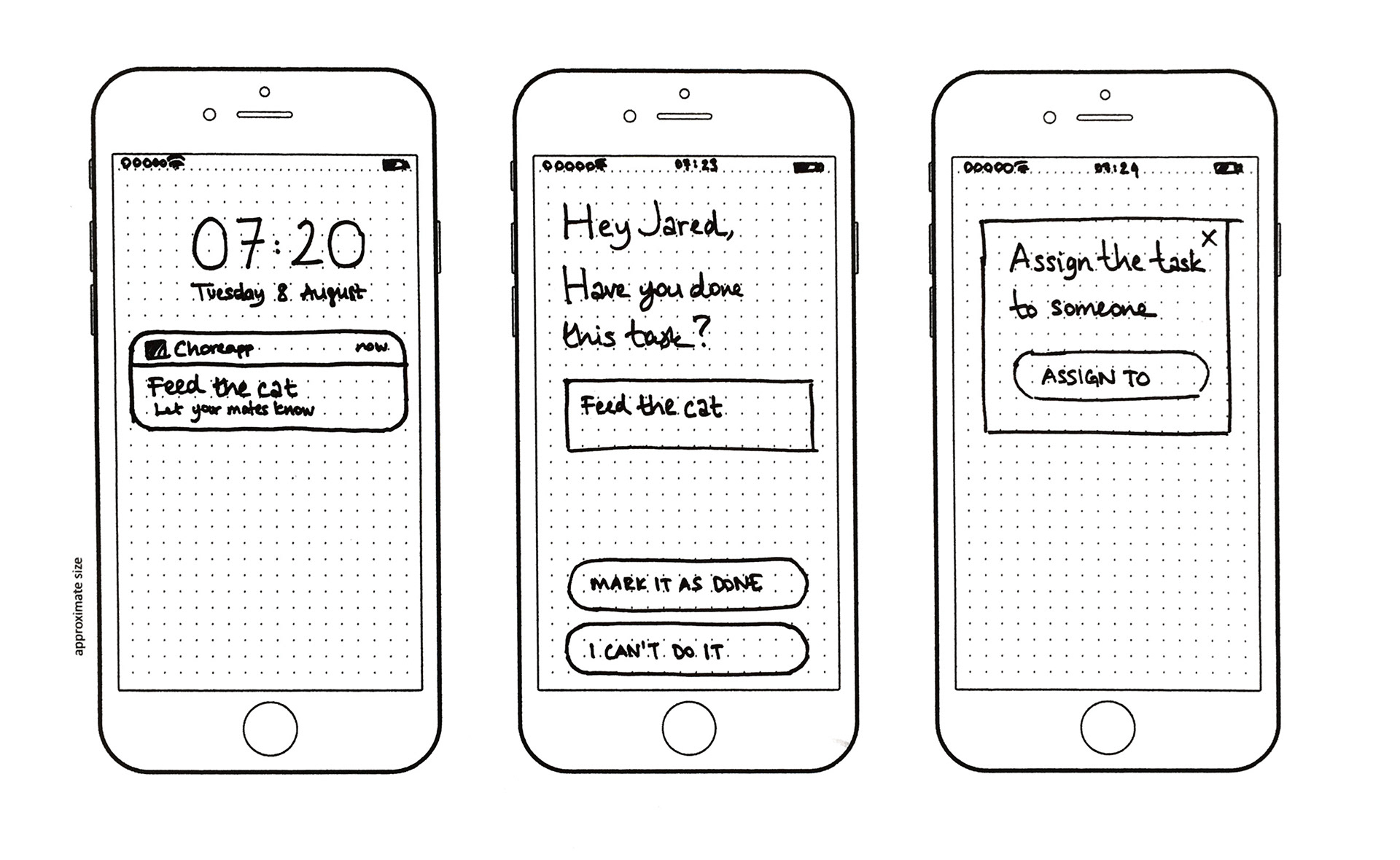 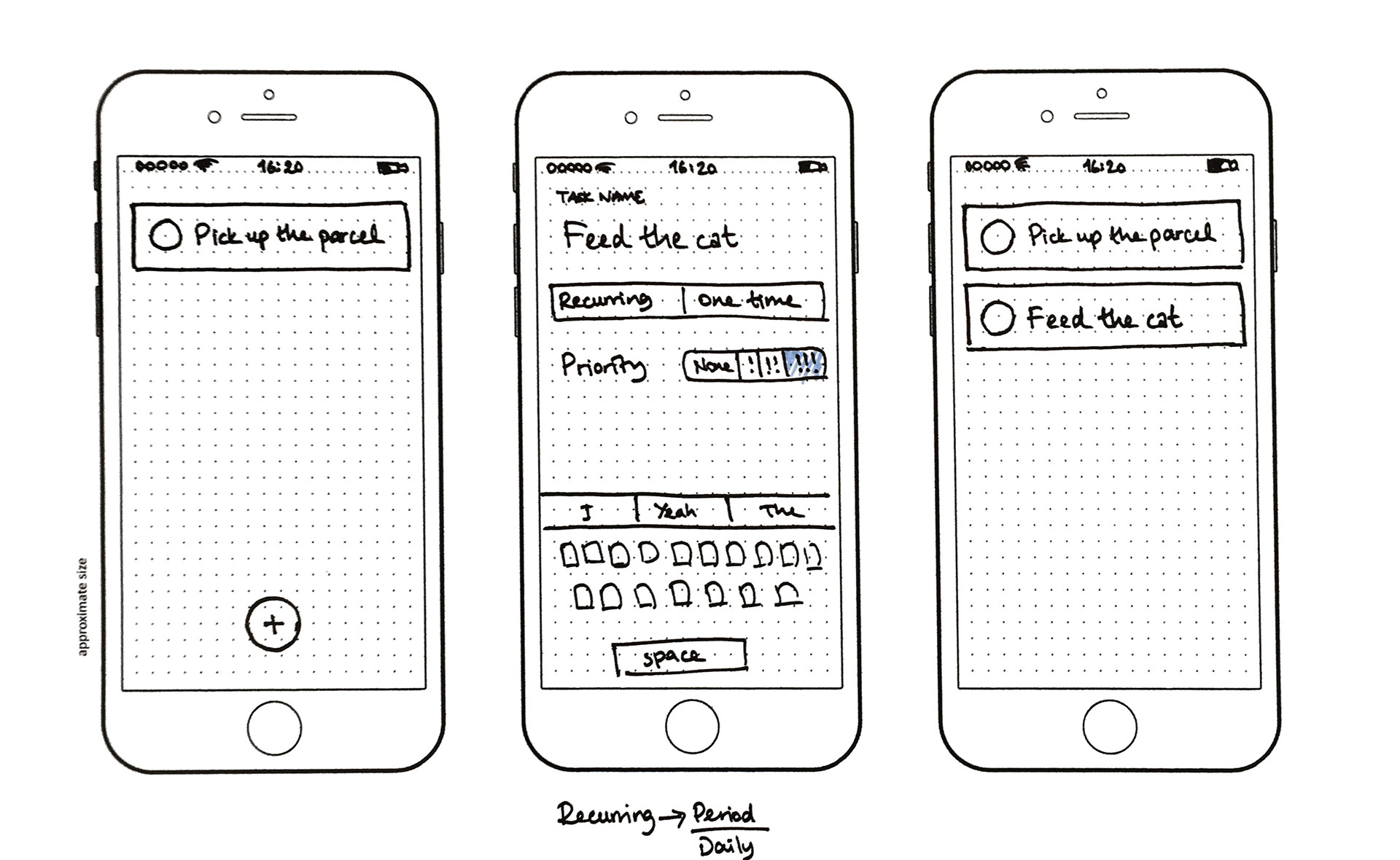 My second idea was simply sending an auto-notification if someone couldn’t complete a task. I created a paper prototype and tested that with Jared. The feedback I got from him was positive, so I digitised the sketches on Marvel to test it with three more people. 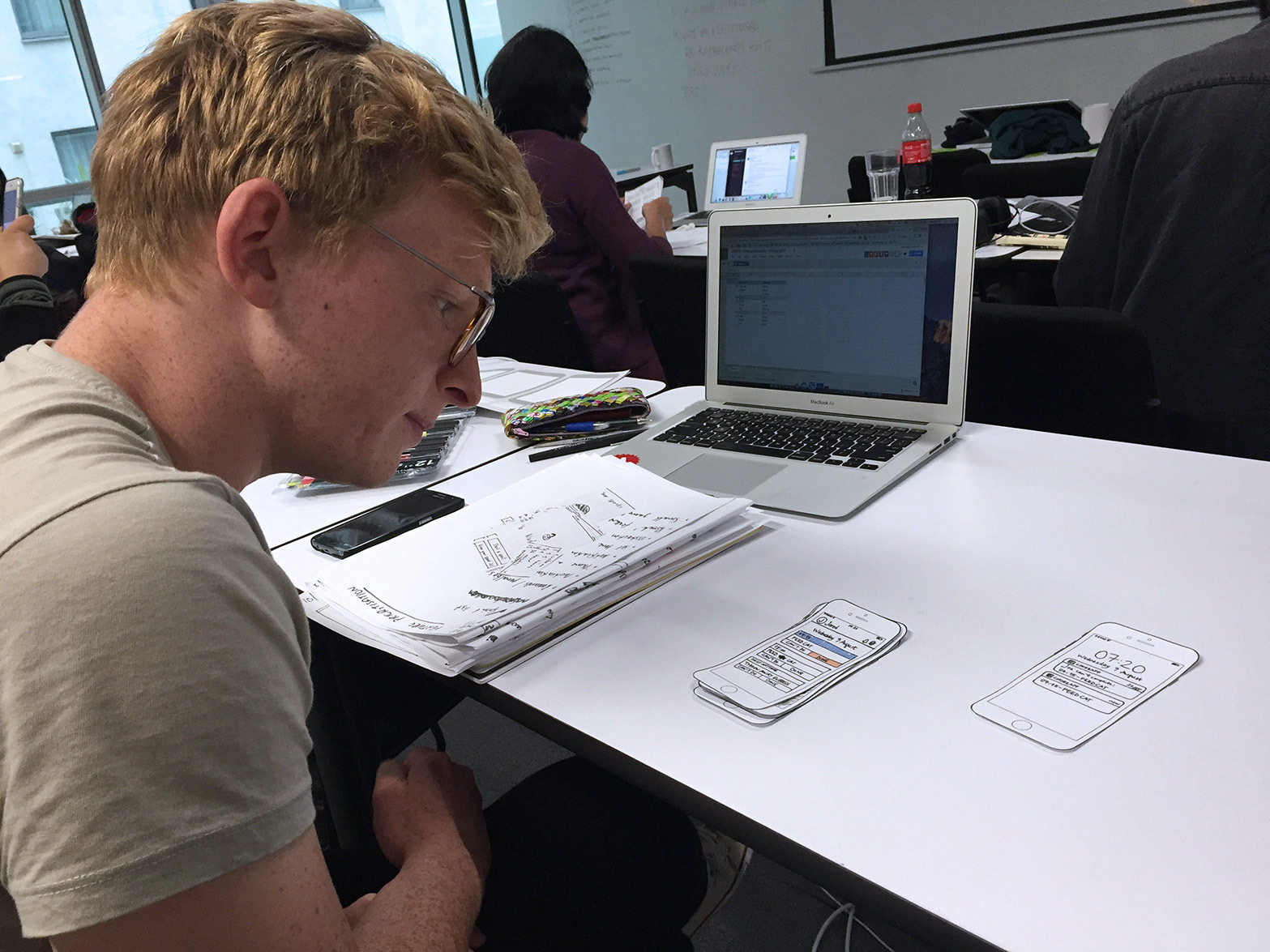 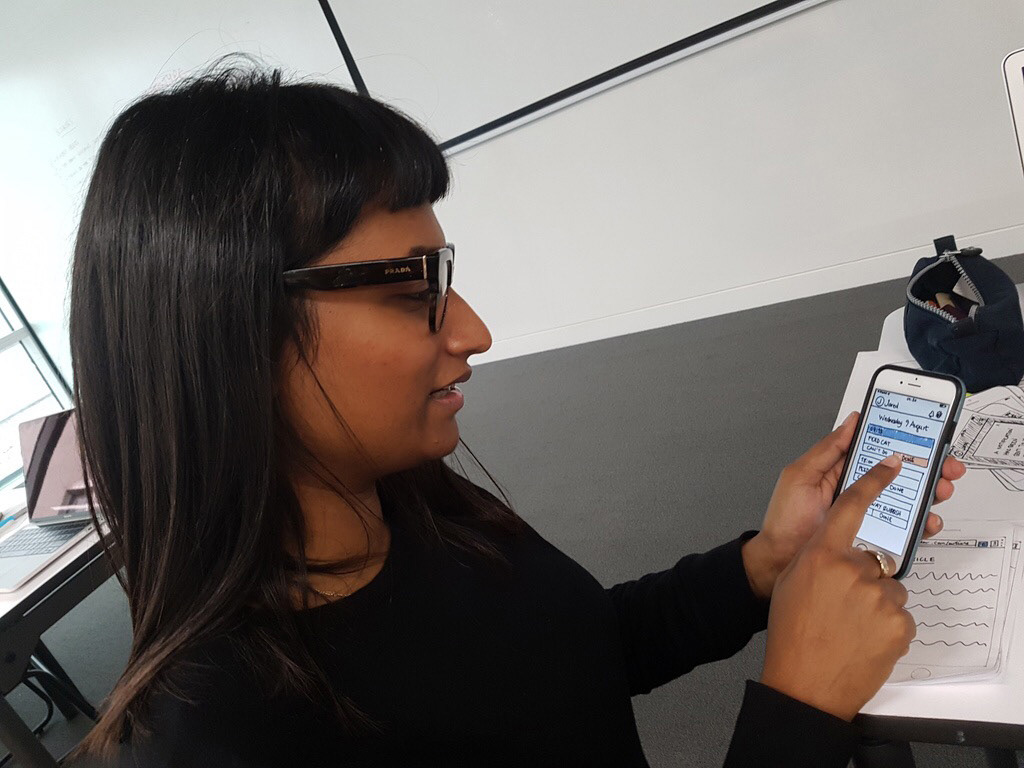 Testing the paper prototype with Jared (on the left) and the digitised version with Anjali (on the right)
From low to high
The second phase of this project was to create high fidelity mockups for the app. It was time to research and create a design that was suitable for the app.
First I defined the brand personality. I wanted the app to be fun to use and not be patronising or demanding. My two traits were as below:
1. Helpful but not pushy: The product is to help household members follow up with each other on certain tasks.
2. Fun but not cheeky: A fun voice could motivate the lazy folk but at the same time “There’s a task over there waiting to be completed, and it’s serious!”
I moved on the mid fidelity designs continuing from where I left off with the paper prototype. One thing I needed to make sure was to clearly indicate which tasks were due and which ones to be completed later. Once I was confident I started thinking about the visual part.
Getting visual
I created two mood boards to start me planning for the high fidelity design. The first board explored how people assigned tasks to each other such as leaving a note on the table, sticking a post-it on the wall, colour coding pegs and sticks to draw from and so on. The second one explored the styles and the task management interfaces. Colour-coding various duties was a common design solution both seen in digital and physical applications. 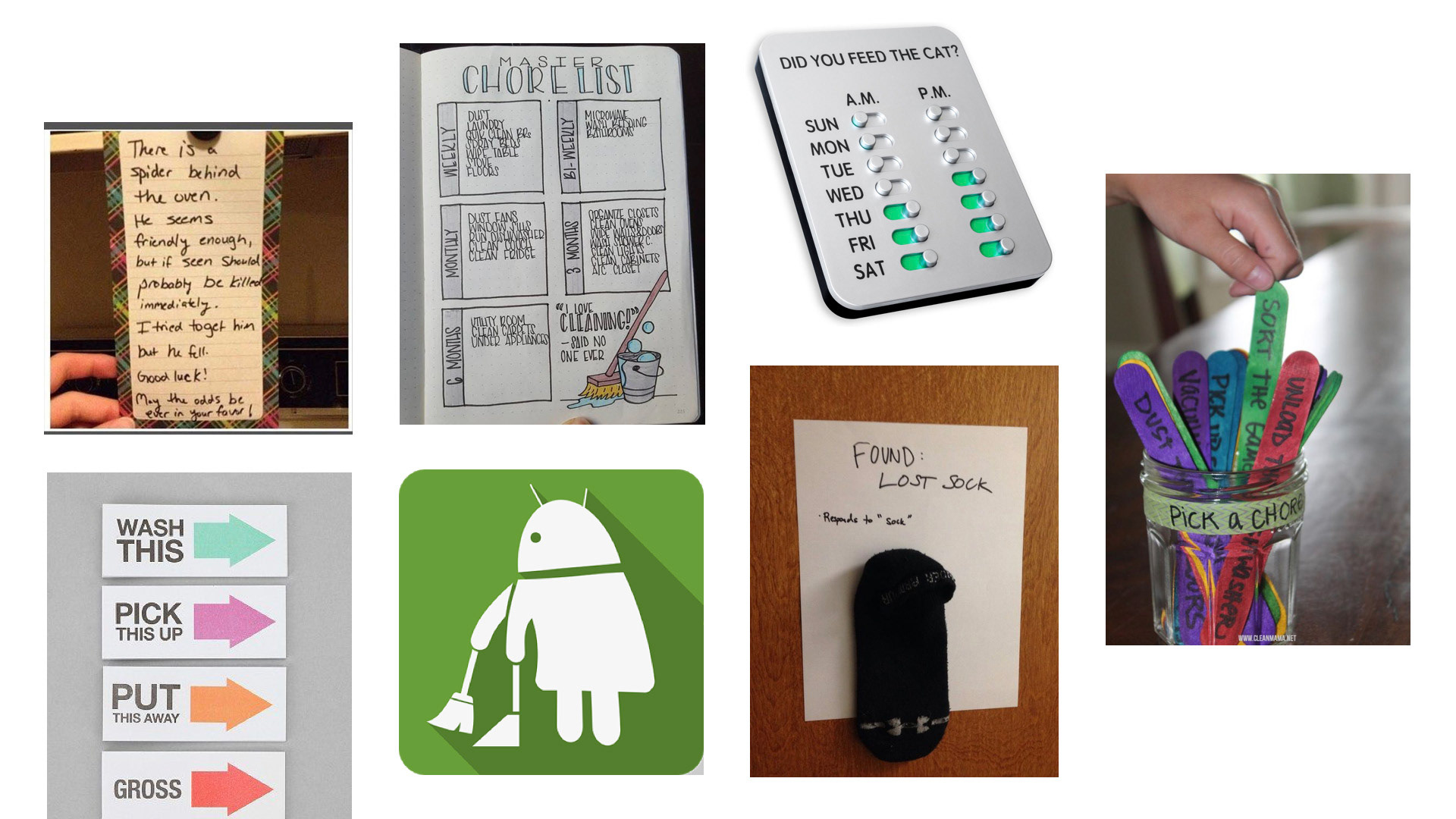 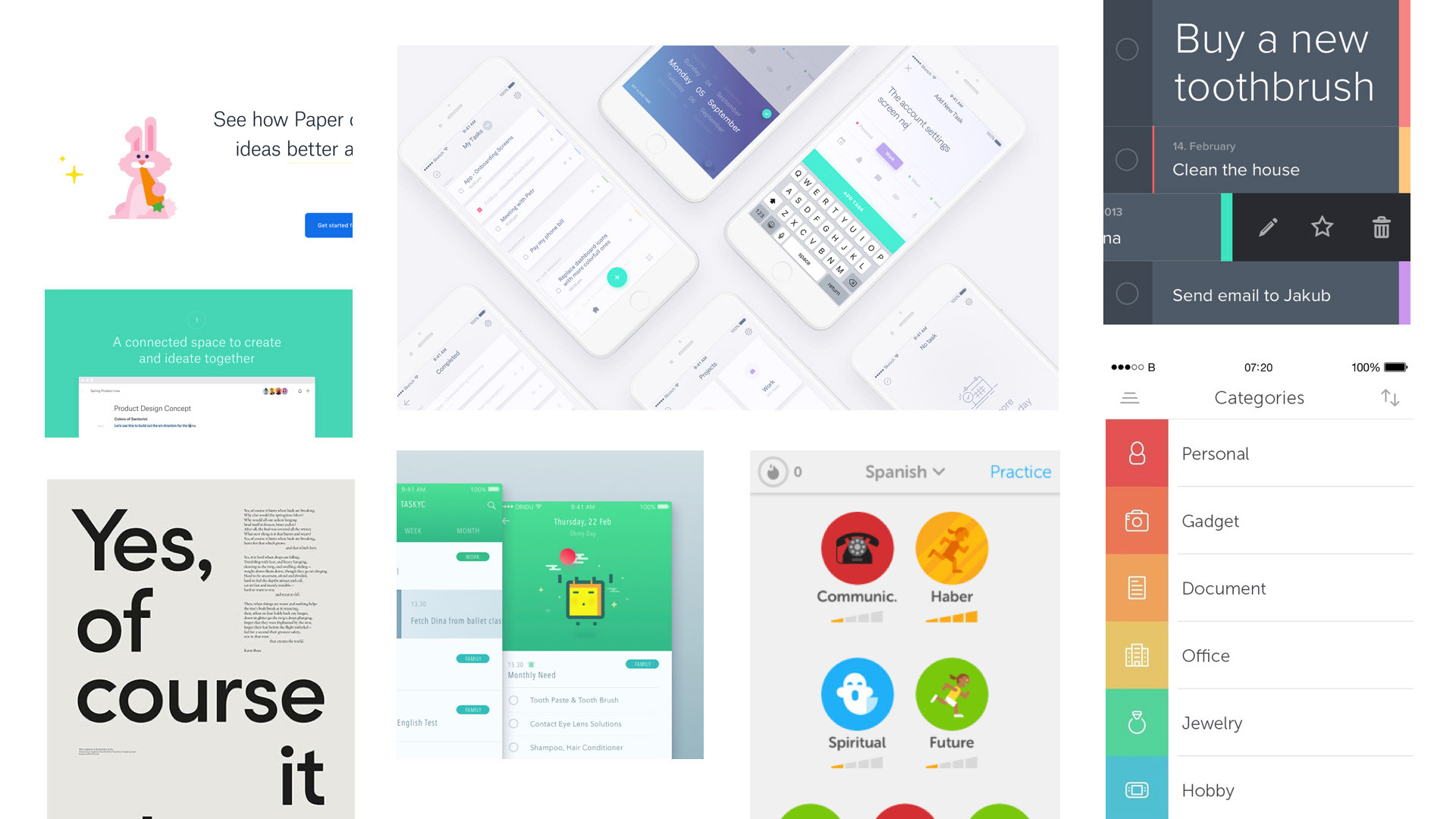 Moving on to design, I kept a friendly, vibrant feel that derives from the mood board. Dropbox, a cloud storage tool, was an excellent example of how a platform widely used by businesses could incorporate a fun style through colours and illustrations. Matching with my mobile app’s name and story, I also decided to use cat illustrations that appear on splash and notification screens that hopefully made the whole burden of task completion cycle more pleasant.
Prototype
The final step was to create an interactive prototype on InVision. In this story, Jared wakes up, feeds the cat and marks the morning task as completed. However, as he has plans for the night, he’ll let his friends know that he won’t be able to do the evening feed.
Click here to see the prototype.
Hope you enjoyed!
Next Steps
In the current flow, it was assumed that the tasks were already created. If time allowed, I would like to work on the flow of adding tasks and also would like to explore:
• Assigning tasks to a specific person
• Finding a system for determining the destiny unattended items
Well, that’s it. Hope you enjoyed!

Voyanta Workflow Module
↑Back to Top